The story of Acadians in Maryland began with their unexpected arrival in Annapolis in late November, 1755 after being deported violently from Grand-Pré and Pisiquid, Acadia (present-day Nova Scotia) by the British.  On the morning of November 20, 1755, Annapolis residents awoke to see the schooner Leopard with 178 Acadians aboard lying at anchor on the Severn River.  By the last two days of November, three other sloops - the Ranger (with 263 Acadian exiles), the Elizabeth (242) and the Dolphin (230) - joined the Leopard at anchor in the river.

Over 900 destitute exiles, or French Papists in the eyes of the predominantly English, Protestant townsfolk, were frighteningly equal in number to the entire Annapolis population.  These “French Neutrals,” as the Acadians were known, caused great concern among the citizenry on the eve of the French and Indian War.  After all, just five months earlier General Edward Braddock, the British hero, had been killed in a humiliating defeat at the Battle of Monongahela and Marylanders were hastily preparing for invading Indians.   With Governor Sharpe attending a Council of War in New York, Council President Benjamin Tasker ordered that the Acadians be distributed throughout Maryland.  The Ranger was sent to the Choptank River (Oxford); the Dolphin to the Patuxent River (Lower Marlboro, Upper Marlboro, Port Tobacco) and the Elizabeth to the Wicomico River (Princess Anne).  The “French Neutrals” on board the Leopard were split between Annapolis and Baltimore. 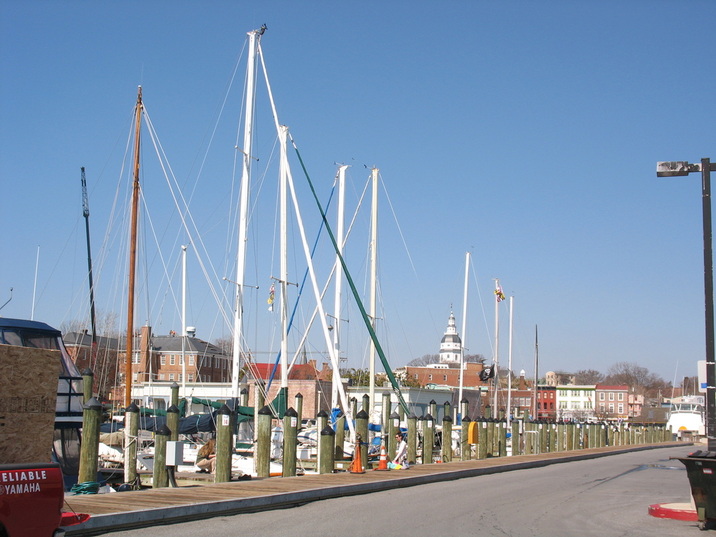 Dock at Annapolis
On their arrival and during their stay in Annapolis, Acadians may have seen or visited these:  *Governor Calvert House (58 State Circle) - built 1720 *  Brooksby-John Shaw House (23 State Circle) - built 1720-1725 *  Saint Anne's Episcopal Church & Cemetery (199 Duke of Gloucester Street) - built originally 1704-1775; present church 1859 *  Reynold's Tavern (7 Church Circle) - built 1737 *  Shiplap House (18 Pinkney Street) - built 1715  [May be oldest structure in Annapolis] *  John Sands House (130 Prince George Street) - built 1739 *  Patrick Creagh House (160 Prince George Street) - built 1735-1747 *  Charles Carroll the Barrister House (King George Street; but originally located at Main Street and Conduit Street) - built 1720-1723.
2. Middleton Tavern (2 Market Space): From their ships these unfortunate French Neutrals appealed to the sympathies and compassion of the townspeople, but the care and feeding of over 900 exiles, all victims of a humanitarian disaster, were responsibilities that the town could ill-afford.  Certainly, as the 178 Acadians of the Leopard disembarked on these shores in early December 1755, they passed near the Middleton Tavern and may have rested a bit under its roof.
_3. Duke of Gloucester Street and Hanover Street: The Acadians of the schooner Leopard who remained in Annapolis initially were housed in large warehouses near the harbor on Duke of Gloucester Street and on Hanover Street.
4.  Charles Carroll House (109 Duke of Gloucester Street): Built in the 1720s, this large residence was home to both father and son that shared the name Charles.  Wealthy Catholics, both men assisted the Acadians to the best of their ability within the limits of government restrictions forbidding Catholics to house or support Acadians.  In early 1756, the father Charles Carroll of Annapolis requested that the government let him house two families of 14 persons, but was refused.  Charles Carroll provided monetary aid to the Acadians following a correspondence with his son in 1759, in which he described their miserable conditions. It is important to note that the son Charles Carroll of Carrollton was studying in Europe from 1749 until 1764, was absent from Maryland during the French and Indian War and was not present when the Acadians arrived.  The son, Charles Carroll of Carrollton did not help the Acadian cause from Maryland from 1755-1763; instead, at his father's request, he relayed his father’s thoughts to others in Europe. In the early 1770s Charles Carroll of Annapolis hired two Acadian women as seamstresses.  Charles Carroll of Carrollton was the only Catholic to sign the Declaration of Independence. 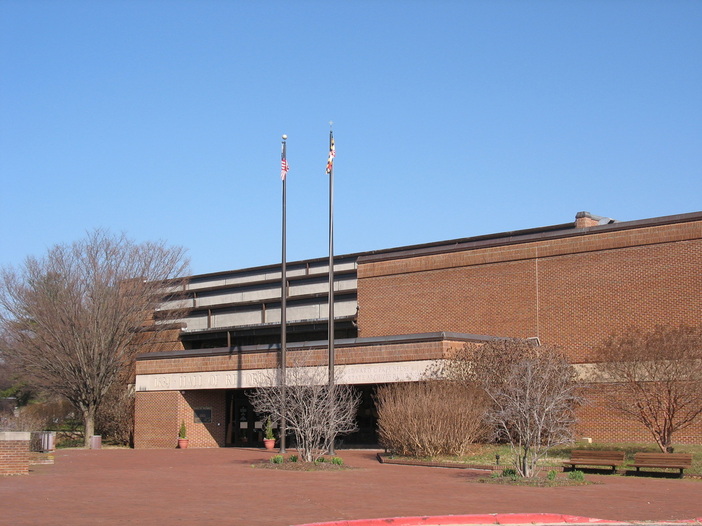